Eating animal-free on the go can be troublesome stateside, but in Europe, it’s a cinch. Even in London, I was amazed by the plethora of plant-based choices at pubs, mom & pop’s, hotels and the like.

Warning: If you’re vegan, it’s a whole different story. Cheese, butter & sometimes eggs are prevelant in meat alternatives. All of these choices are sans-meat, but not all are vegan. 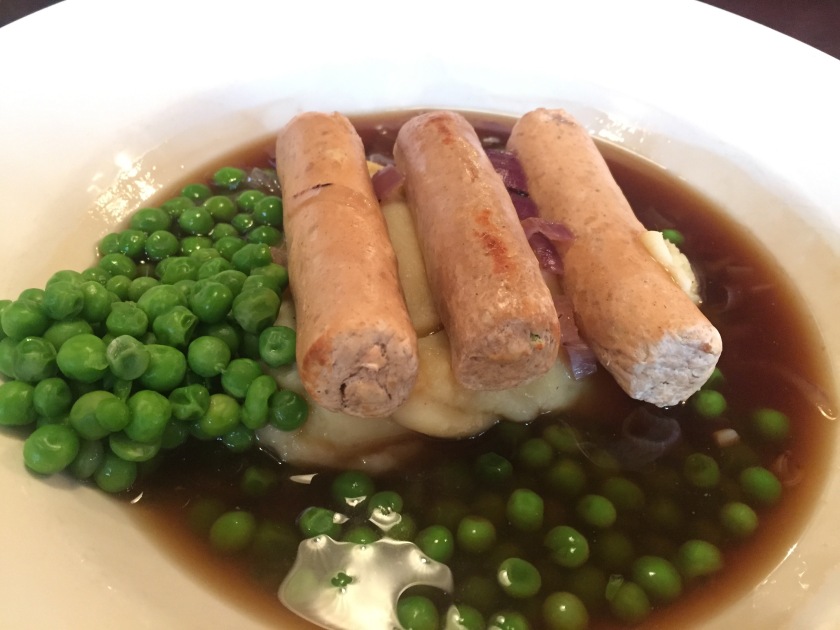 My first (& one of my favorite) vegetarian meals was at a local pub, recommended by the concierge at our little hotel. There, I immediately spotted vegetarian bangers & mash, a meat-free take on classic English fare. The plate featured yummy veggie sausages (the “bangers”) atop a pile of mashed potatoes & peas. I’m not a huge fan of peas, but the English seem to put them on everything – whether they be mashed, creamed, mushy, or firm. I think I’ve officially hit my lifetime limit of peas. Anyways, I loved that I got to try some English food the veggie way, particularly at the very first pub we went to! 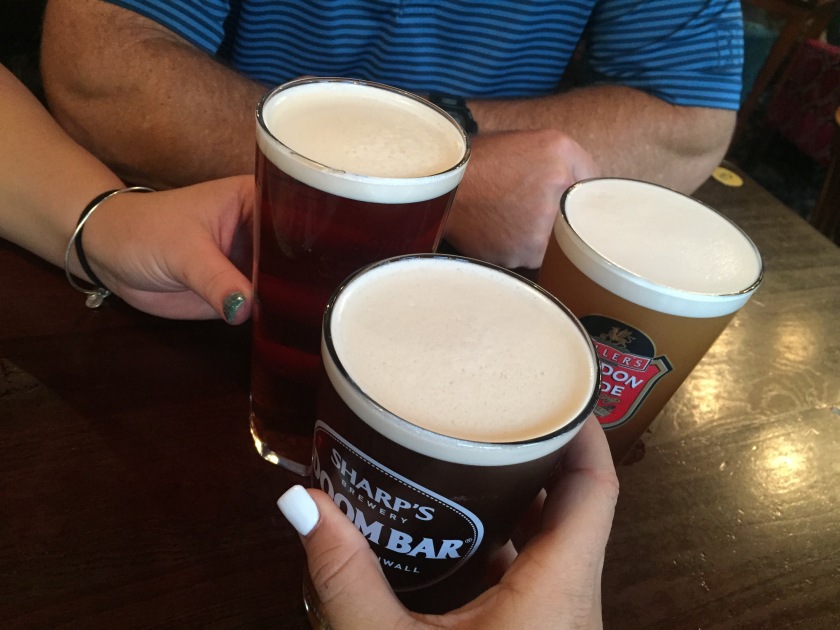 Thankfully, beer is always a good choice anywhere in the world 🙂 Our trip was off to a really good (animal-friendly) start. 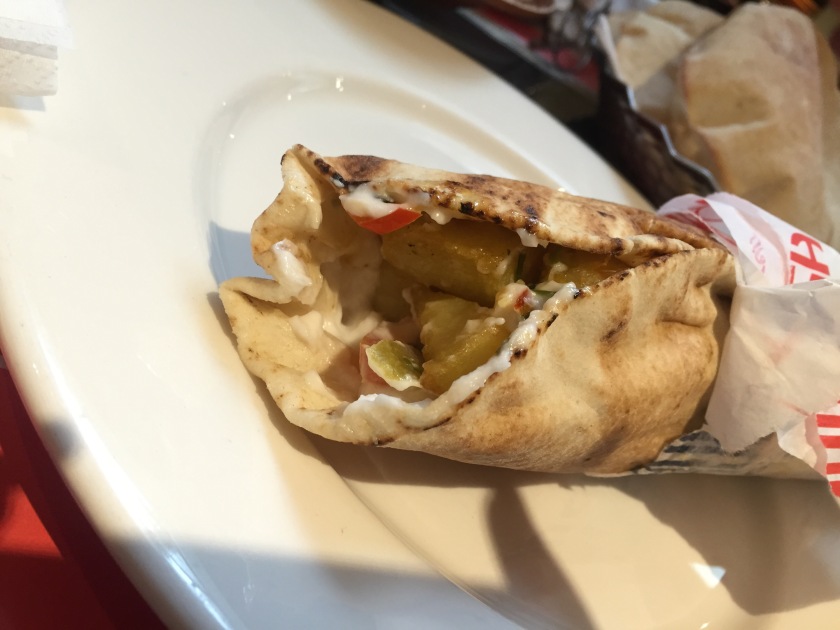 Just like in the States, ethnic food is an easy way to garauntee that delicious, healthy & plant-based abound. In many cousines, veg dishes aren’t just an accident or tossed in the menu to appease vegetarians – they’re main dishes, delicacies and staples. One of my favorite things on the entire planet is Lebanese food, and local spots were dotted all along London’s quaint streets. I feasted on a Batata Harra wrap, a spicy mix of diced potatoes and sautéed veggies, creamy sauce and hummus. It was so delicious I honestly almost cried! I love pairing spice with creamy, and this wrap was cheap and totally blew my mind. 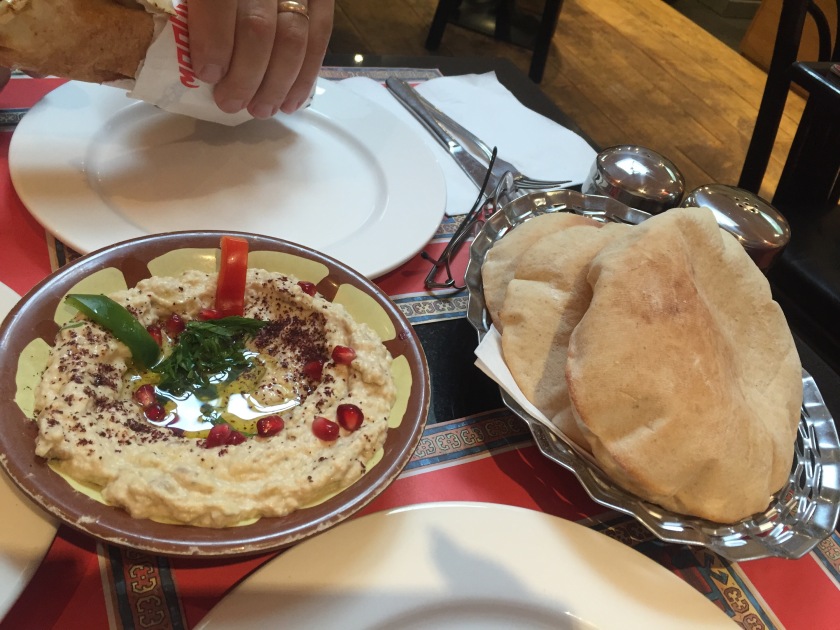 Thankfully, we were wise enough to order some baba ganoush, an hummus-type dip made of cooked eggplant, oils, tomatoes, onions and spices. Ours even featured some pomegranate and bell peppers, alongside homemade Lebanese pita bread. Yum!! 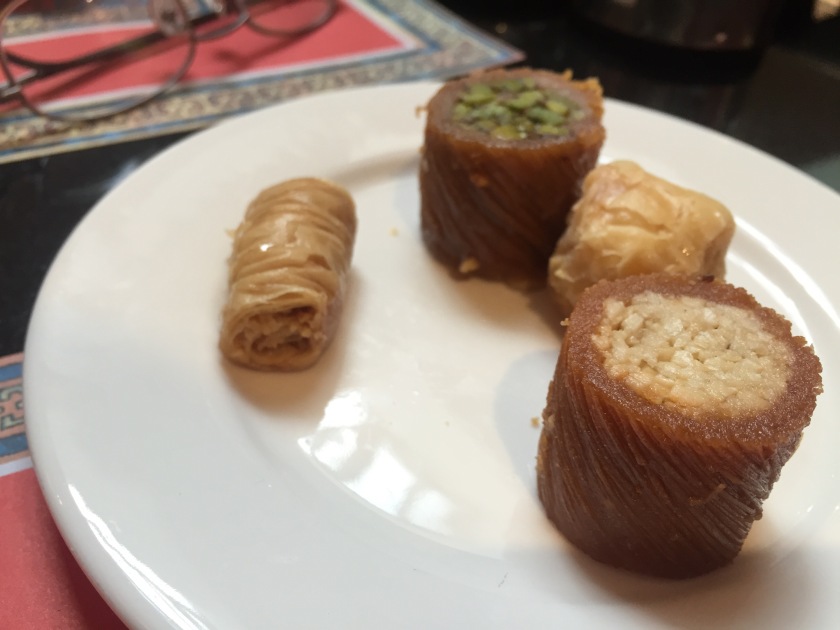 As if the meat-friendly meal couldn’t get any better, it totally did. Every table finishes off with a plate of fresh fruit and varieties of Baklava. Each one was so insanely delish that we were fighting over the crumbs like little kids. My favorite was the one in the back with green filling – an uber-yummy pistachio delicacy. 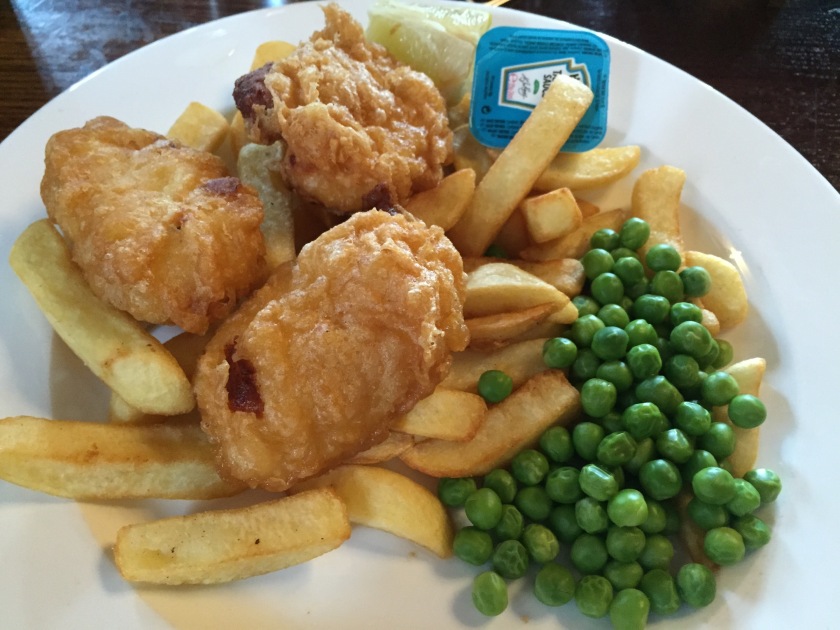 Another English staple is the crispy, greasy, fried fish & chips – with, of course, a side of peas. I was stoked to find two different pubs that served up a vegetarian-friendly version. The fish filling is made of a certain kind of cheese, which sounds really odd – but the thick texture of the cheese and fishy seasoning were surprisingly close to the real deal. Again, if you’re vegan, this wouldn’t have been an option, but it’s still a welcome gesture that it’s even offered. 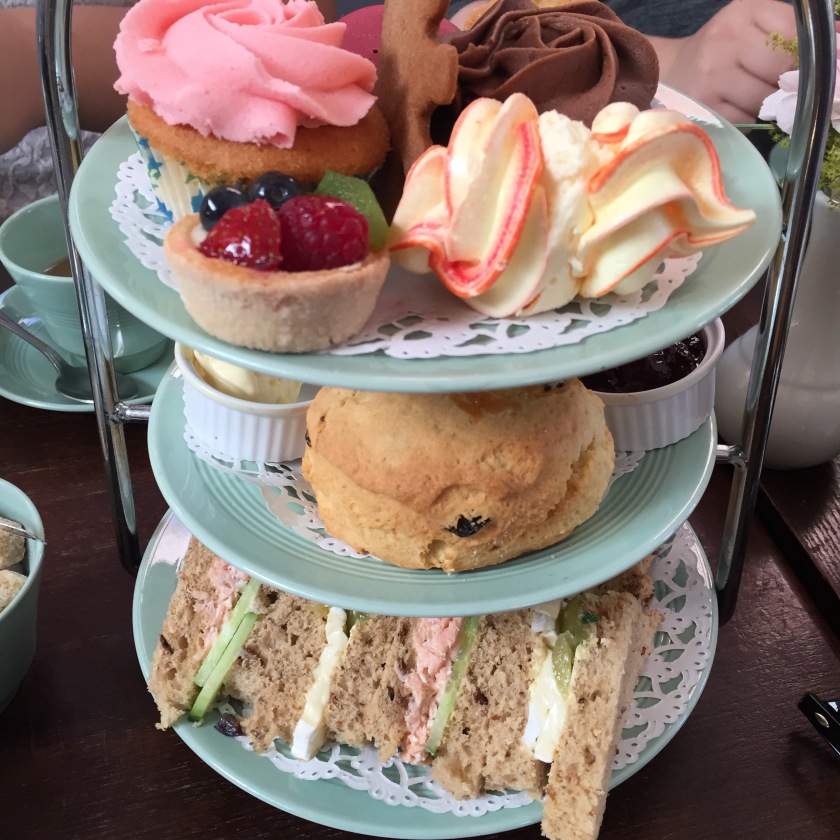 English tea time: a beautiful, adorable, and necessary food-related experience while on the British isle. Tea time was quaint, cool, and a total blast – and eating meat-free was a cinch. My sandwiches came with peeled grapes & brie, and were arguably the best little sandwiches on the menu. I’m totally going to make these at home, tea party or not. The second tier (you work your way up) was filled with yummy scones and clotted cream, followed by some super-sweet little desserts. If you’re vegan, again, tea time would be a toughie. 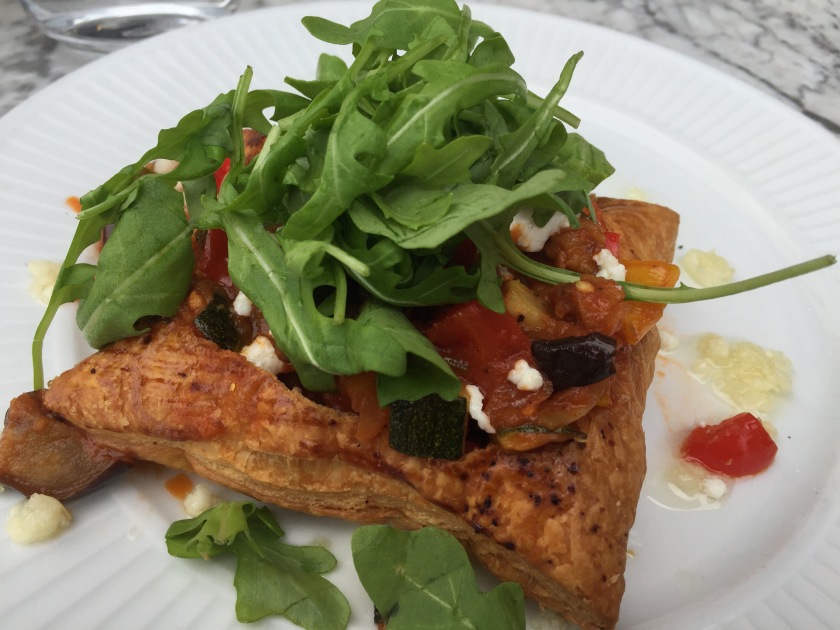 We also stopped by an adorable little French cafe on the river outside of Windsor Castle. We feasted on warm bread, a beautiful pea & pumpkin soup (there’s the peas again!) and this delicious, flaky pastry stuffed with goat cheese, olives, and ratatouille. Yea, you read that right. I’m salivating just writing about it – the flaky pastry and ratatouille combo blew any soup & sourdough Stateside experience out the window. 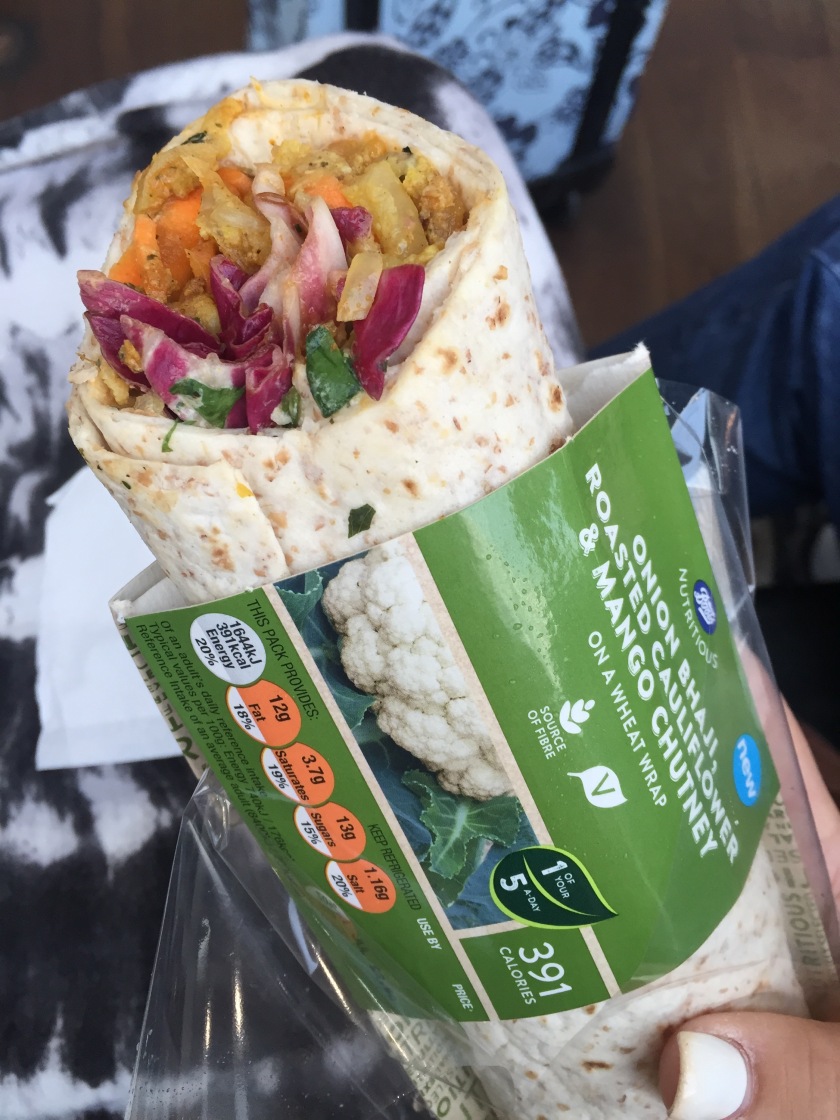 American airports are known for being crammed with overpriced fast food and mile-long Starbucks lines. To be fair, they have been getting a little better with their food chocies, but still pale in comparison to every experience I’ve had in Europe. The UK was no different – we found ourselves starving & overtired, struggling to pick what and where to eat. Since we were also nearly out of money, we popped into a convenience store and found an awesome combo deal for a drink, wrap & snack. I chose this insanely good wrap and a side of edamame & hummus, coupled with an all-natural, no sugar added ginger rootbeer. Why don’t we have this many healthy, affordable options in the States??

I had an amazing time in England – I honestly can’t wait to go back! And, of course, eat more food 🙂 happy travels!