Every girl loves a man that can cook. I have to admit I’m overwhelmingly blessed in the beau department – my fiance is a cook. He works at an awesome chain restaurant that shall remain nameless, and there he learned lots of dreamy qualities. For example, how to make tabouleh, shrimp ceviche, and thai peanut noodles from scratch. I also don’t need to ever buy a food processor, since eight-hour work days have given him the ability to chop anything into dust in a mere thirty seconds.

Yes, my man can cook. But since he cooks for a living, he doesn’t whip up anything around the house too often. But whenever he does, my mind is simply blown. If I’m sick, tired, or just haivng a bad day, the magic words “I’ll make you something good at home, promise” have me practically bouncing off the walls in anticipation. Although he could barely fry an egg before his first shift, he now sees cooking as another way to take care of me (like I said, I’m blessed.)

I’ve been sick for the past week or so, and me being sick translates into an angry nightmare of a woman with few boundaries. Once you take away my health, I turn into a snappy, short-tempered toddler. I’m not proud of it, but it happens; having to push through a full time work week didn’t exactly boost my mood, either.

So, my fiance offered to make his hungry, whining girlfriend a meal. I mentioned we had some tomatillos (those cute little green tomatoes) that were about to go bad, along with some already-cooked quinoa. Next thing I know, I smell something even more delicious than usual wafting over from the kitchen. 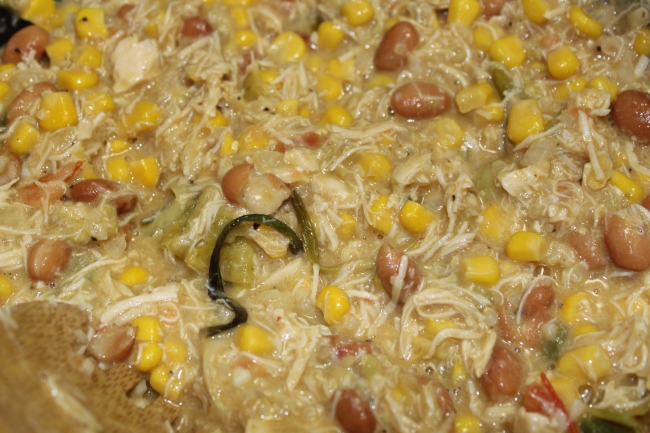 What he made was a kind of stew, made from tomatillos, corn, tomatoes, onions, pinto beans, green onions, minced garlic, a single jalepeno pepper and some shredded chicken all fried in sesame oil. Now, I try my darndest to avoid animal products – but I do allow myself a ‘meat meal’ (as opposed to a ‘cheat’ meal) once or twice a month, usually for special occasions. And since Rocky knows this, and thought the dish would be much better with it, he tossed it in. And I, wanna be vegetarian that I am, have aboslutely NO complaints 🙂

This dish is so good it’s rediculous. He kind of threw it all together as a kind of mexican-sesame-quinona hodgepodge, so I have to fine-tune it before I churn out a solid recipe (which I plan to do with beans and tofu!) But, I can tell you that it’s stupid, finger/pan/plate-licking good.

To start, he fried some minced garlic in sesame oil in a pot over medium heat; meanwhile, he roasted the green onions, tomatillos, and jalapeno in the oven to get them soft. He gradually mixed in the roasted veggies, tomatoes, and onions followed by the meat, beans and corn, eventually letting the mixture fall to a gentle simmer on low. Since quinoa burns quick in the pan, we threw it in last.

To get the creamy texture, he poured in some greek yogurt – about ¼ to ½ a cup, to taste – and fried two whole wheat tortillas in some sesame oil. To make the tortillas healthier, you could always just steam them in the microwave.

This dish does have a lot of oil, but you could easily reduce it (although it won’t be as amazing) but I’m going to try a cleaner version asap.