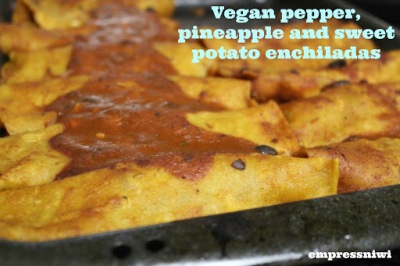 I have a serious, full-blown addiction to Mexican food. Blame it on my Long Beach, CA upbringing, but I honestly crave tacos, burritos, sopes, tamales, you name it on a daily basis. Here in Hawaii, good Mexican food is few and far between – aside from a Tamale man occasionally on the side of the road in Waimanalo, nothing here comes close to the real thing.

Thankfully, I know how to cook  – at least well enough to satisfy my cravings. Now that I’m on a mostly plant-based diet, Mexican food is the easiest thing to make that keeps me and my boyfriend happy. These enchiladas are vegan, gluten free (if you leave out the beer) and aren’t skimping at all on flavor. Enchiladas are my go-to and favorite ethnic dish, and this recipe is the best healthy and vegan version I have on hand. 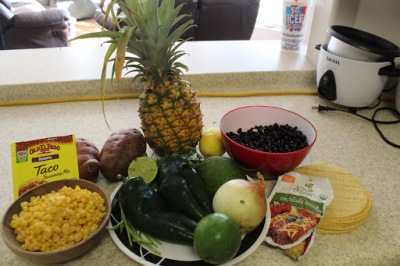 I used dried beans, fresh pineapple and a packet of organic enchilada sauce from Whole Foods; if you feel like saving time and dishes, feel free to use canned versions! (Old El Paso red enchilada sauce is awesome).

I happened to be drinking a Negra Modelo at the time, and I would definitely suggest using some when making the potatoes & veggies if you’re down for using beer. 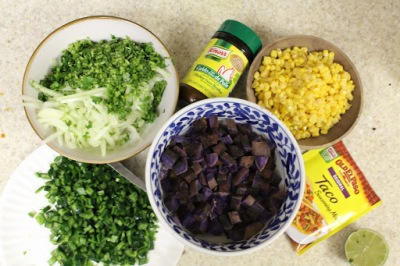 The process gets pretty messy, so I always try to prep my pan first. Coat a medium-sized sheet pan with cooking spray and set aside. Since the enchiladas are made in a sort of assembly line, I also like to lay down some paper towels on the counter to protect it from the sprays and dropped filling and all that. Trust me, it will happen!

Drizzle a large pan with olive oil and use to cook the potatoes for about 5-10 minutes on medium heat. Add water or beer and a pinch of taco seasoning, and stop cooking when they’re almost – but not quite – done. Set aside. 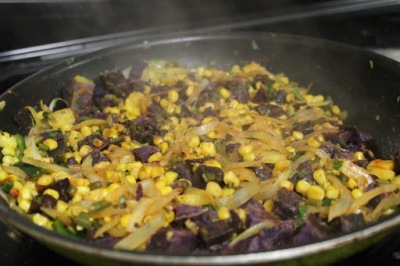 Next, cook the veggies on medium; coat the pan with olive oil and toss in the onions, cilantro and peppers first. Note: the peppers can be pretty spicy, so it’s best to add them in gradually and judge by the smell or taste so it won’t get too hot.

Cook until the onions start to sweat; next, add the corn, sliced pineapple and sweet potatoes. Continue to pour in either water or beer to a gentle simmer. Continually add in seasonings and squeeze lemon lime to taste.  After about 10 minutes, place the veggies in a bowl.

Put enchilada sauce in a wide, shallow bowl big enough to drop tortillas in and set right next to the stove. Grab your prepped sheet pan and put it close to the enchilada sauce.

Next, coat the pan generously with olive oil to quick fry the tortillas. (For a healthier option, wrap tortillas individually in wet paper towels and microwave for 30 seconds or until warm).

To fry, place as many tortillas as possible in the pan (I fit three) and let them simmer. Once the oil crackles and the tortillas change color and texture, flip them over. Next, drop the fried tortillas into the enchilada sauce completely while you put the next round in the pan.

Take each drenched tortilla, drop it in the pan, and fill it with a scoop of black beans and a scoop of veggies. Roll tightly and place in a row.

It’s best to multi-task or grab a friend to help; as you fry a fresh batch of tortillas, the last round should be soaking and the one before that should be getting filled and rolled.

When you’re all done, cover the enchiladas with remaining sauce, lemon, and lime. If desired, toss some vegan cheese on top, and feel free to add additional seasoning or spice like tapatio. 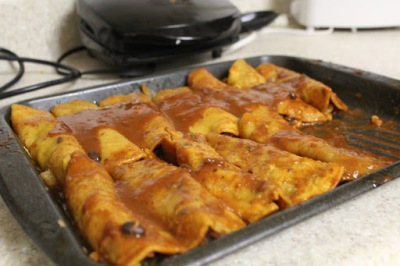